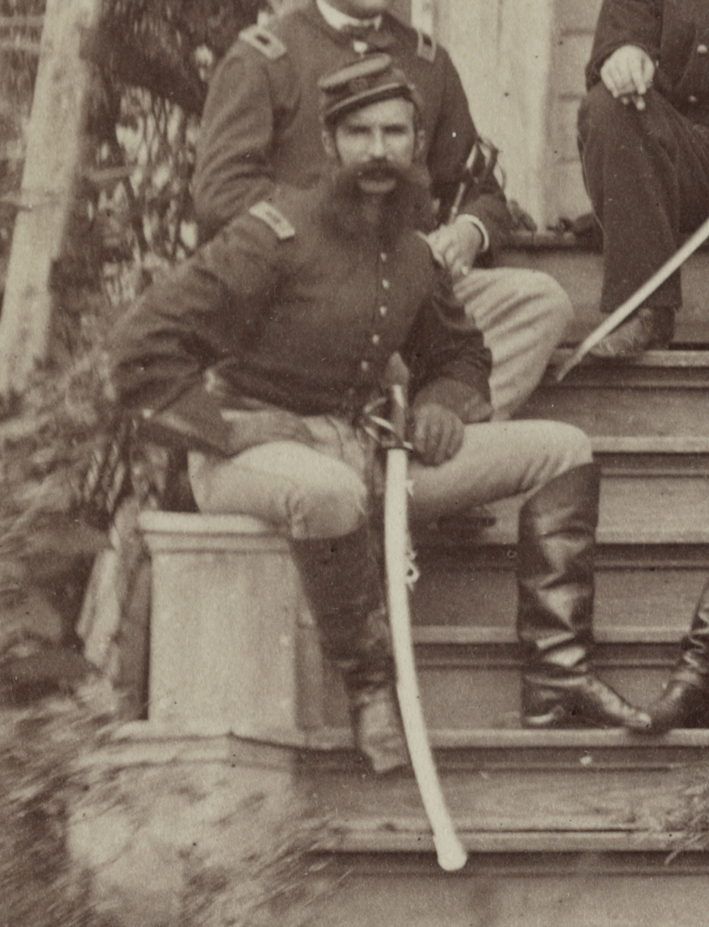 Many of Midleton’s men and women have emigrated down through the years, settling all over the globe and becoming part of the Irish diaspora. Some went on to become relatively famous abroad- for example Nellie Cashman– a woman who will be the topic a future post. However one man, although his family name remains closely associated with Midleton, is not well-known in the town of his birth. This is despite the fact that he is undoubtedly one of the town’s most successful and colourful emigrants. His name was John Joseph Coppinger.

Coppinger was born in Midleton on 11th October 1834, into the powerful Catholic landowning family. He was one of six children of William Joseph Coppinger and Margaret O’Brien. We don’t know much about John’s early life, until he begins his first associations with the military- associations that would continue across more than half a century. He first tested out the military in the 1st Regiment of the Warwickshire Militia- The London Gazette of 12th October 1855 recorded that ‘John Joseph Coppinger Gent.’ was to be an Ensign from the 29th September. However, his life of adventure really started in 1860 when he became a Captain in the Papal Battalion, a group of Irishmen which travelled to Italy to defend the Papal States from the ongoing efforts to reunify Italy. During the fighting there the young Midleton man performed well- his defence of the La Rocca gateway that September earned him the position of Chevalier and two Papal decorations. (1)

When the Papal War was lost, John Joseph Coppinger was one of a number of men in the Battalion who elected not to return home permanently. Instead he travelled to the United States. According to one account, upon the outbreak of the American Civil War, Archbishop Hughes of New York sought advice from clergy in Ireland as to young Irishmen of influence who might come to America to become officers: …’Bishop Keane, the patriotic prelate of Cloyne, who had been parish priest of Midleton, recommended [Coppinger]…and he was one of six young Irishmen who came to the United States as commissioned officers.‘ (2)

So began John Joseph Coppinger’s long an extremely successful career in the United States military. In September 1861 he was appointed to the rank of Captain in the 14th United States Infantry. Joining the Union Army of the Potomac in July of 1862, he was severely wounded when he was shot through the neck at the Second Battle of Bull Run on 30th August. Lucky to survive, it took him six months to recuperate. John returned to active duty and in 1863 participated in the Battles of Chancellorsville and Gettysburg. (3)

During the Civil War Coppinger was brevetted a Major for gallant and meritorious service at the Battle of Trevilian Station on 12th June 1864, and brevetted Lieutenant-Colonel for the same reason after the Battle of Cedar Creek on 19th October that year. At the time he had been serving on the staff of Cavalry General Alfred Torbert. Recommended for promotion by men such as George Armstrong Custer and Phil Sheridan, Coppinger was appointed Colonel of the 15th New York Cavalry on 19th January 1865, a position he held until the close of the war. (4)

After the war Coppinger returned to the rank of Captain in the regular army and was transferred to the 23rd United States Infantry, with whom he served on the Western Plains. He earned another brevet, this time to Colonel in 1868, for ‘energy and zeal while in command of troops operating against hostile Indians in 1866, 1867 and 1868.’  In 1871 he returned to Cork to attend to family business resulting from a bereavement, and took the opportunity to visit Egypt. However, it was always his intention to return to the United States, and he was soon back in the American West. The Midleton man had a reputation as a dashing officer, and after his return to America he landed in hot water, when he was accused of seducing another man’s wife in California. Described by his accuser as ‘a gay Lothario in epaulettes…a…bold, unprincipled adventurer …a serpent’, Coppinger was outraged by what he described as ‘infamous falsehoods’, but whoever was in the right, the incident eventually died down. It did not hurt his military career, as John was promoted to Major in 10th United States Infantry in 1879 and Lieutenant-Colonel in the 18th United States Infantry in 1883. 1883 was also the year he finally married, tying the knot with Alice Stanwood Blaine (25 years his junior) in Washington D.C. on 6th February. The wedding was attended by President Arthur and his cabinet, a mark of how high Coppinger had risen. The couple would go on to have two sons, Blaine and Conor, but Alice would die tragically young just seven years later, during an influenza epidemic. (5)

John’s march through the ranks of the army continued. He was promoted to  Colonel as a result of service rendered against hostile Native Americans between 1886-1888, and took command of the 23rd United States Infantry in 1891. He finally became a Brigadier-General on 25th April 1895. When the Spanish-American War broke out in 1898, the Cork native took charge of the 1st Independent Division in Mobile, Alabama. He later served as Major-General of Volunteers commanding the IV Corps. John Joseph Coppinger retired from his 36 year career in the U.S. military on 11th October 1898. The Midleton man died in Washington D.C. on 4th November 1909, where he is buried in Arlington National Cemetery. (6)

Today John Joseph Coppinger is all but forgotten in his home town. Indeed he is one of the many hundreds if not thousands of men from around Midleton and East Cork who fought in the American Civil War and who are no longer remembered at home. Surely one of Midleton’s most successful and noteworthy emigrants, remembering John Joseph Coppinger’s life is hopefully something that will improve in the future.

*The most comprehensive research on John Joseph Coppinger to date has been carried out by the late Brian C. Pohanka, who’s work is referenced in this article and should be rightfully acknowledged.

The London Gazette 12th October 1855. Commissions signed by the Lord Lieutenant of the County of Warwick.

Tucker, Spencer 2005 (ed.) The Encyclopaedia of the Spanish-American and Philippine-American Wars